END_OF_DOCUMENT_TOKEN_TO_BE_REPLACED

The Foundation Day of VKIC, Guwahati was held on 31 January, 2012 (Tuesday) at 5.00 p.m. in the Williamson Magor Auditorium of the Institute in which the annual VKIC SANMAN was also awarded.

Shri Dipok Kr Barthakur, Chairman, VKIC delivered the Welcome address and Objectives of the programme. Speaking on the significance of the Foundation Day & the VKIC Sanmaan, Sri Dipok Kr. Barthakur, Chairman,  VKIC said that VKIC has been organizing this programme since 1999 to honour a person from the Northeast who has made significant contribution to the society in the field of preservation, protection and advancement of traditional culture. The award consists of a Citation, a Plaque and Cash award of Rs. 25,000/- The Chairman briefed the house about the preparation for the 150 Birth Anniversary Celebrations of Swami Vivekananda.

Shri Som Kamei, Director, North-East Zone Cultural Centre, Dimapur, Nagaland  who was the Chief Guest of the programme conferred the VKIC SANMAN-2012 award on Shri Rupnath Basumatary, Director, Bathou Mission, Bengtal, BTAD, Assam. The programme was attended by a capacity audience from all walks of life and concluded with 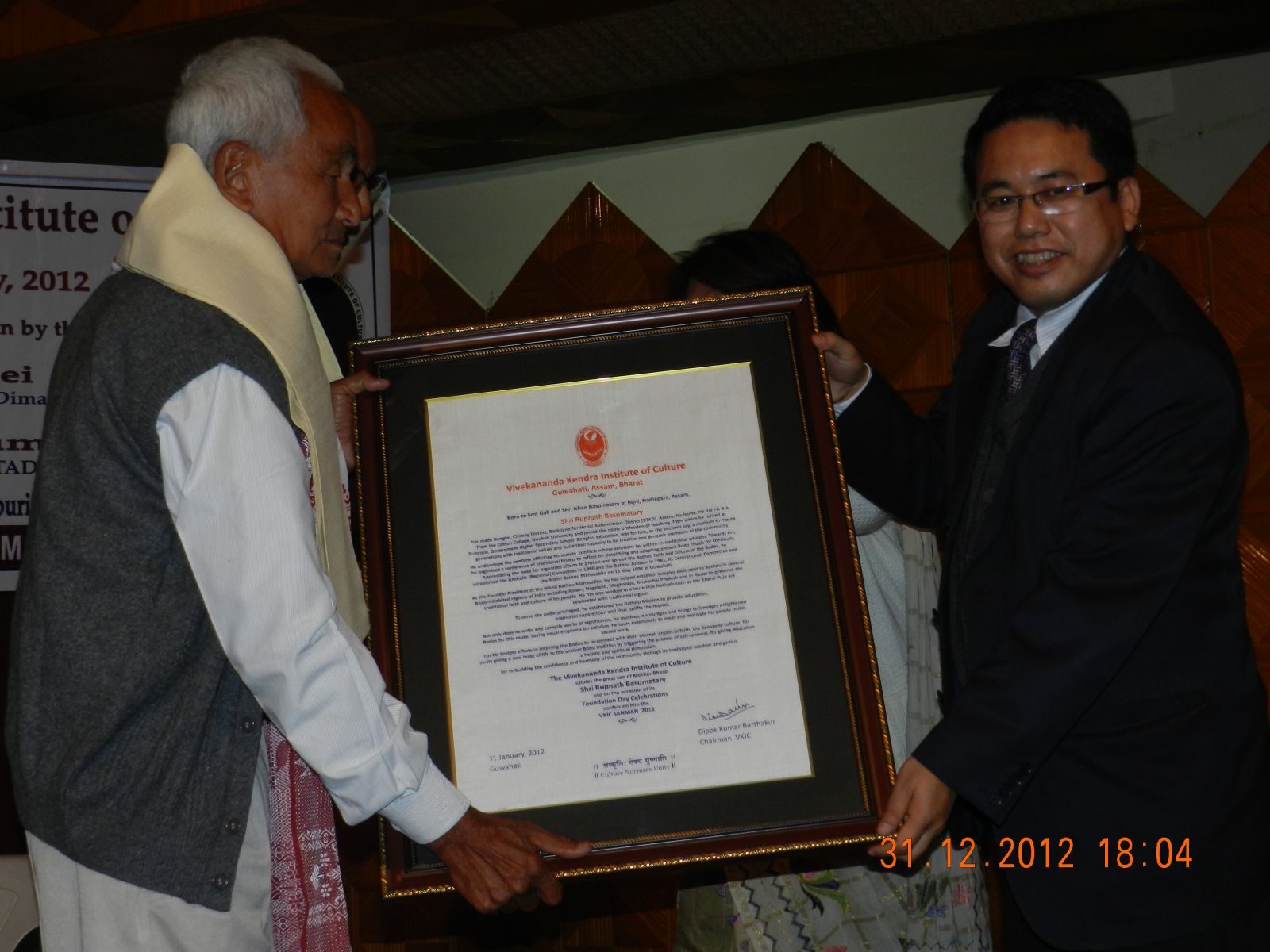 a musical-dance-drama ensemble by the Chokhani Korang, a performing art group of Tripuri community from Tripura led by Smt. Tarubala Debbarma, which enthralled the audience. The performance depicted the community life in total that resonate with the nature; form the birth to death passing through the different stages of an individual’s life in relation to society.

In his acceptance speech the awardee Shri Rupnath Basumatary, Director, Bathou Mission, Bengtal, BTAD, Assam, said that Preserving and promoting different streams of culture and life of different communities is important and it forms the basis of unity and hence peace and prosperity of a nation. The work undertaken by the VKIC in this line is commendable and he hoped that it would have its centres throughout the Northeast for it is showing the way to practical means of manifesting culture which is the need of the time, he said.

Conferring the VKIC Sanmaan, Director, North-East Zone Cultural Centre, Shri Som Kamei, said that he considers VKIC as an institution of excellence working to serve the society through the inspiration of Swami Vivekananda. Traditional faith form the basis of the moorings of people but silent and consistent efforts at the grassroots to adapt and sustain it goes unrecognized. The VKIC has to be appreciated for conferring public recognition on such silent work as that of Sri Rupnath Basumatary who was working to sustain the Bathou tradition of the Bodos. Lauding the multi-pronged efforts of the VKIC in this regard, he appealed to all to come forward in nurturing the different communities, particularly in North-East India. Dwelling on the work of the North East Zone Cultural Centre, he said the task was to take culture out of air conditioned rooms in cities to where it belongs – the people. His experience indicated that while there are 400 communities in the Northeast alone, a unifying thread runs through them. He was glad to note that the VKIC has been carrying on significant work through seminars, research with community participation for adapting this rich cultural heritage for development. This he felt was in common with the working of his centre and the VKIC. Stating that there are many challenges in this front especially with rapid changes taking place in the society, due care has to be taken to support and promote varied local traditions he said.