END_OF_DOCUMENT_TOKEN_TO_BE_REPLACED

Tribal Studies: Search for the Common Thread of Unity

The micro data of different communities of India –its castes and tribes – if put together and viewed in macro frame-work often leads us to the threads of unity. The apparent diversity, the cultural plurality gives way to commonality of cultural elements, our cultural continuum. Our approach brings a lot of difference – the approach whether we want to emphasize the diversity or intend to search the basic materials of culture, the permutation and combination of which make the difference. 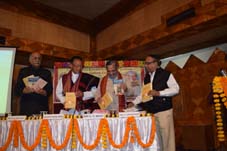