END_OF_DOCUMENT_TOKEN_TO_BE_REPLACED

The Foundation Day of Vivekananda Kendra Institute of Culture (VKIC), Guwahati was celebrated on 31 January, 2013 (Thursday) at 5.30 p.m. in the Williamson Magor Auditorium of the Institute. The vital note of the function was the conferring of the prestigious VKIC Sanman.

Shri Dipok Kr Barthakur, Chairman, VKIC delivered the Welcome address. Speaking on the significance of the Foundation Day & the VKIC Sanmaan, Prof. D.C. Baroowa, Director, Research Advisory Council, said that VKIC Sanman was instituted in the year 1999 to honour people from North East in recognition of their significant contribution to the society in the field of protection, preservation, and advancement of one’s own culture. The awardee for this year i.e Jan 2013  was Shri Latsam Khimun, Secretary General, Rangfraa Faith Promotion Society, Changlang, Arunachal Pradesh  The award consists of a Citation, a Plaque and Cash award of Rs. 25,000/-. 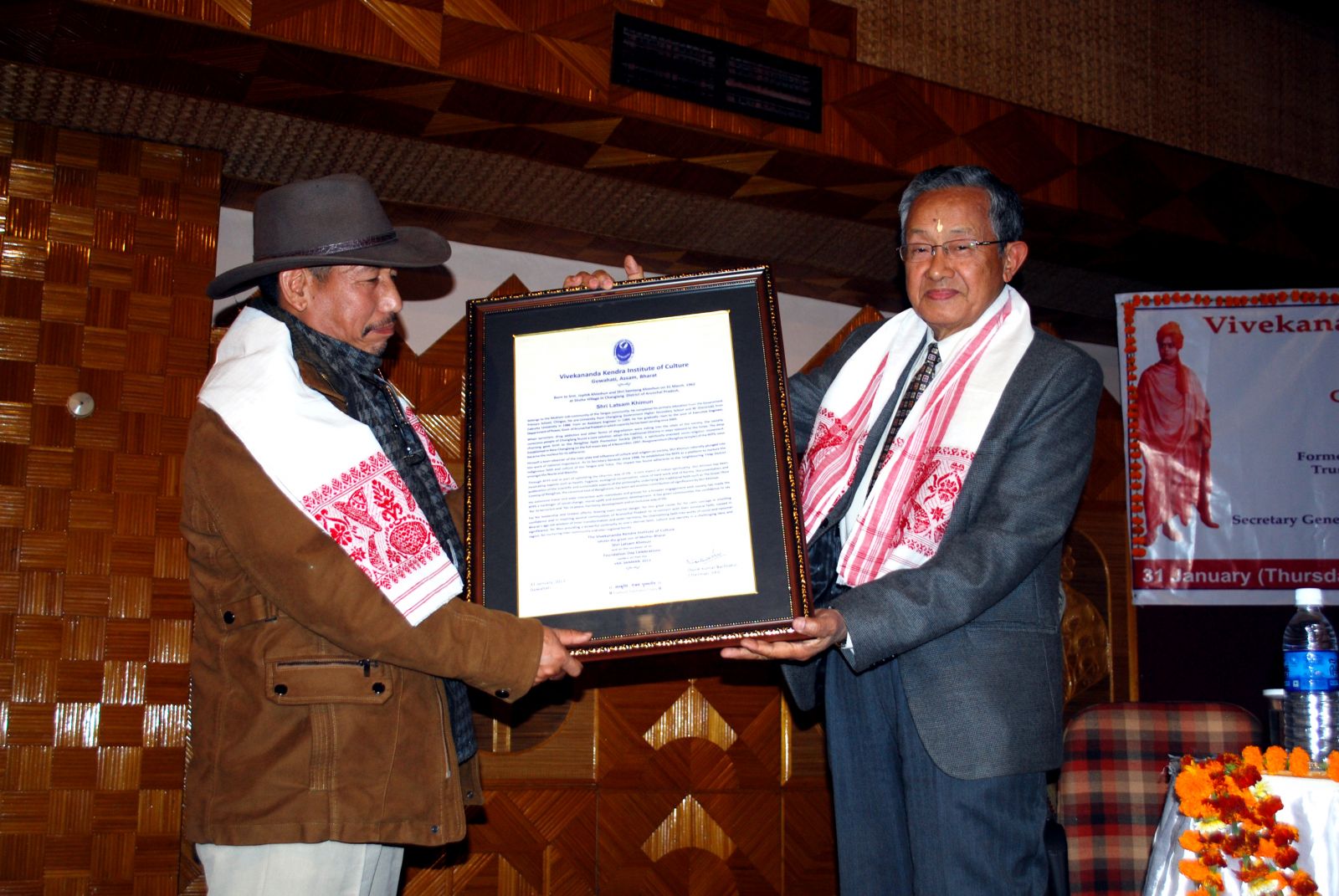 Shri Latsam Khimun an engineer by profession has been working relentlessly for the socio-religious and cultural upliftment of the people of Arunachal Pradesh. He along with his fellow community people initiated the Rangfraa movement or the indigenous faith. They started an organisation known as Rangfraa Faith Promotion Society and ever since 1998 he has been the secretary general. Under his supervision, 68 Rangsowhum (Temples) have been constructed.  The RFPS not only works towards eradicating the social evil practices and superstitious beliefs that prevailed in the society but always works towards improvement of health, hygiene, ecological protection and so on.

Acknowledging his immense contribution towards the society, the prestigious VKIC Sanman was conferred upon Shri Khimun.

Later, in his acceptance speech, the awardee, Shri Khimun said that every human being is a form of God- each being an amalgamation of good and evil. He believes that the evil in oneself will eventually fade away when one is capable of demarcating between the good and the evil and respect the laws of God- both external and internal. He also spoke about dharma and religion. Dharma can be both active and passive. While the former implied seva, tyag, etc., the latter implied a sense of being harmless. On the other hand, religion implies various methods of imparting religious training, place of worship, etc. Shri Khimun opined that all the indigenous communities were dharmic but due to the influence of political, economic and other factors, the people have become adharmic. Shri Khimun, through the RFPS, has been striving to eradicate the social evil practices and superstitious beliefs in the society and replace them by right beliefs. Shri Latsam Khimun appreciated the work undertaken by the VKIC and thanked VKIC for conferring him the award.

Conferring the VKIC Sanmaan, Shri Niketu Iralu congratulated Shri Latsam Khimun and applauded his efforts in evolving a way to nurture people in the grass root level. He also appreciated VKIC for conferring public recognition on such work as that of Shri Khimun. Shri Iralu also shared his wide experiences of his stay in different parts of India and also abroad. He spoke on the theme “Being a Bridge” where he emphasised on the idea of reaching out, to understand others, to be understood and also on the importance of living a dignified life. Conflicts are real and according to him, these can be overcome by the attitude of compassion. He believes that the peace and harmony of the world will be sabotaged unless we learn to walk in each other’s shoes. 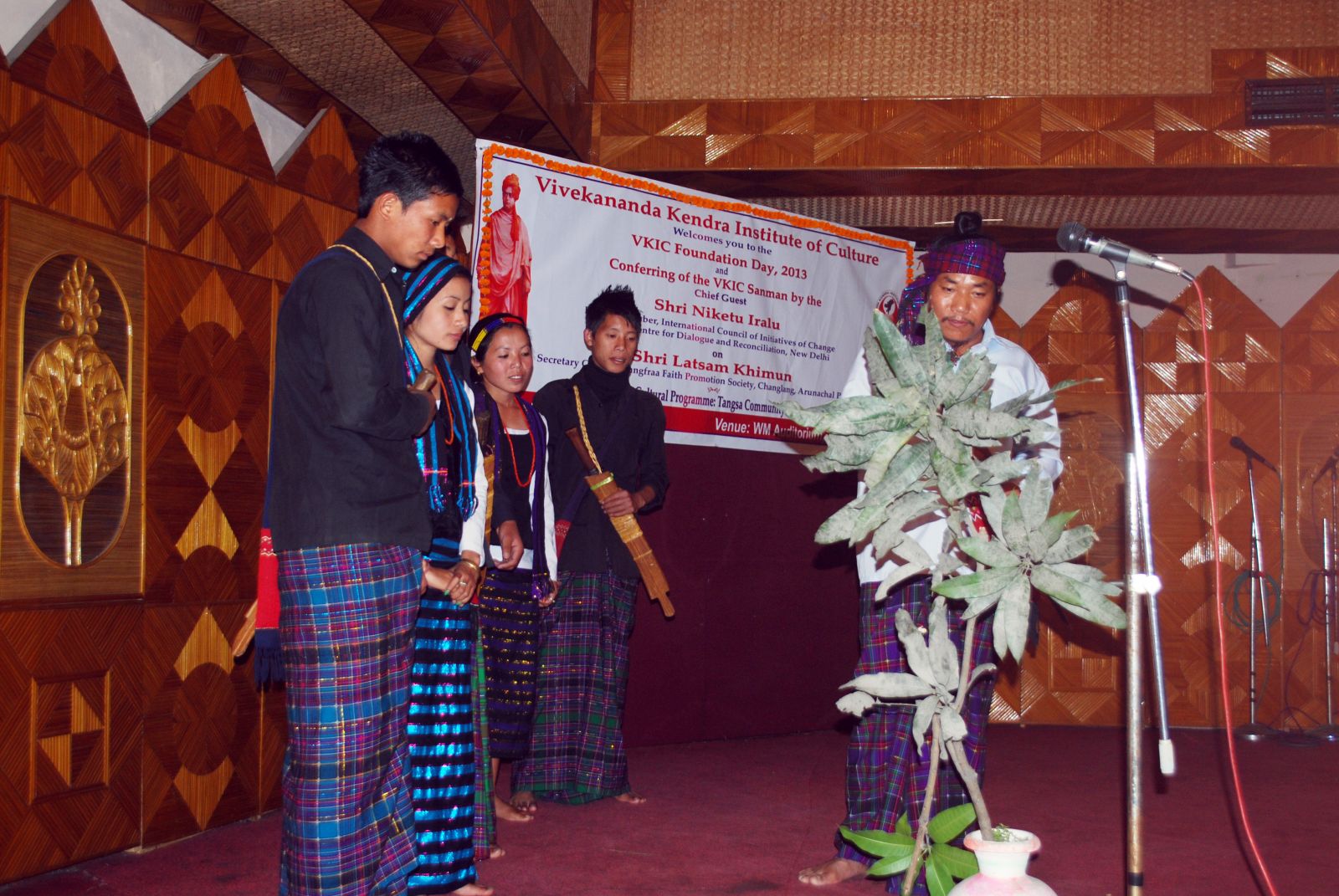 As part of VKIC endeavour of communicating culture of different communities and also of celebrating the auspicious occasion a drama was staged. It was performed by group of artists of the Tangsa community from New Yumchim Village, Changlang District, Arunachal Pradesh. The enthralling drama was based on eradication of superstitious beliefs and practices prevalent among the people.

The programme concluded with a vote of thanks by Bharti Nandy and Shantipath by Mona Kashyap.