END_OF_DOCUMENT_TOKEN_TO_BE_REPLACED

The Unsung Heroes | Quest | Episode - I 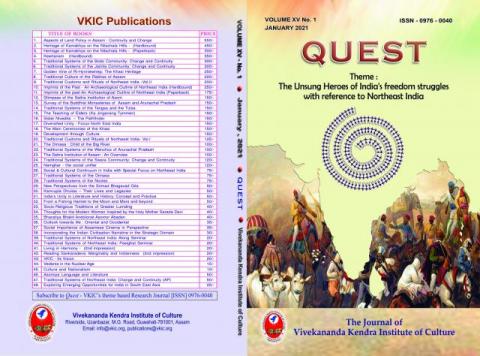 The theme of the Book -

India, the largest democracy in the world had seen a very long history of freedom struggle before its independence from the British in 1947. Millions of natives who came out to fight the British rule gave their lives to break the shackles of oppression. The freedom of India is due to the sacrifice of thousands of freedom fighters all over the country. Many people have played significant roles in raising the national movement. Freedom fighters like Rani Lakshmibai, Mangal Pandey, Bahadur Shah Zafar, Nana Sahib, Tantia Tope, Surendranath Banerjee, Subhash Chandra Bose, Bal Gangadhar Tilak, Dadabhai Naoroji, Chittaranjan Das and Jawaharlal Nehru etc., played a great role in getting independence for the country.

Like in other parts of the country, the freedom-fighters from Northeastern states also sacrificed their lives and suffered atrocities in the hands of tyrannical British rulers. The East India Company’s rule in the region began with the Treaty of Yandaboo in 1826 after the First Anglo-Burmese War. The victorious British, then, seized control of the region. In Assam, the British rule was challenged by a group of the erstwhile nobility led by Gomdhar Konwar. Their attempt, however, was suppressed in 1828 and Gomdhar and his associates were imprisoned. One of his associates Piyali Borphukan was hanged.

The successive years saw an increasing opposition to British subjugation. British expansion to the hills faced fierce resistance by the hill tribes. The Khasis led by U Tirot Sing fought valiantly against the British from 1829 to 1833. However, the resistance finally succumbed to the British and U Tirot Sing was imprisoned in Dhaka jail. Between the 1830s and 1860s, the hill tribes such as the Singphos, Khamtis, Nagas, Garos, etc., offered stiff challenge to the British expansionist policies toward the hills, causing heavy losses to the latter.

The effect of 1857 was also felt in Assam and Maniram Dewan played a key role to drive out the British from Assam. However, these plans were foiled and Maniram and Piyali Barua were hanged in 1858. Many close associates of theirs such as Bahadur Gaonburha and Farmud Ali were arrested and interned. On September 20, 1942, at the height of the ‘Quit India’ movement, Kanaklata Barua was shot dead by the British forces in present-day Gohpur, Assam. The 17 year old was trying to unfurl the tricolour at a police station.

The same day, in another part of Assam, Bhogeswari Phukanani met with a similar fate at the hands of the Britishers. She too was trying to hoist the Indian flag.
In Arunachal Pradesh, Matmur Jamoh refused to bow down to the Britishers. He breathed his last in Andaman’s Cellular Jail where he was lodged after killing a British officer. Among others who rose against the colonialists was Rani Gaidinliu. A Naga spiritual leader, she became a leading political figure in Manipur. She was arrested at the age of 16 and spent 14 years in jail.

There are many great freedom-fighters who were born in the Northeastern part of the country.  Though people are aware of names like Rani Gaidinliu, Bhogeshwari Phukanani, Veer Tikendrajit Singh, Trilochan Pokhrel, etc. for their great struggle against the British but there are a few names which got lost over the years. Some get the spotlight while some stay in the dark and contribute just as much as the others.

To pay tribute to numerous unsung heroes of Northeast India, who had struggled to get independence for the country from the British rule, we request all our esteemed paper contributors to kindly contribute researched paper on such lesser known heroes, of their lives, their struggles and to unfurl their contributions in the freedom struggle so as to make our homage to our freedom fighters a complete one.

Editorial of the Book

This volume is a humble attempt to record contributions of the people from the Northeast region of India in the country’s struggle for freedom. The articles presented find mention of many personalities; we were unaware of the supreme sacrifices they had made. The freedom we now have and value, must acknowledge contribution of each person from every corner of the country. Our responsibility thus lies, to explore, record and appreciate the contributions made on all forms; leaving the tasks not only to historians who have expertise on methods of oral history. The concern in this regard is that no event that took place does not get unreported.

We perhaps were unaware of the Wancho-British War of 1875; the account compiled by the Karyakartas of  Vivekananda Kendra in this volume. The Wancho-British War was culmination of protest and rebellion against the British introduced system of paying annual tribute in pecuniary form to the government in the middle of the 19th century. In addition to appropriation of the hard owned resources of the peasants and common people through taxation and levies, the colonial rulers did not want any natives to be involved in economic activities where the British had their monopolies. We find reflection how the ruling class had blocked all paths to exert their dominance.
The mode of protest and rebellion was persistent in the nook and corners of hills of the Northeast region – this volume has reflected evidence from Arunachal, Assam, Manipur, Meghalaya, and Tripura.

The narrations and appreciation of unsung heroes make us to ponder, what way we would now contribute to the nation’s development. Will their renunciation and supreme sacrifices for the cause motivate us to work unselfishly, relentlessly for the development of the country ? We can say that only through our selflessness and persistent work will make people of our country be free from poverty, unemployment, coercion and exploitation from the rent seeking class.
Certain points raised and reflections in the articles may appear to be contradictory on the approach to obtain our freedom. The mode of protest or resistance against the colonial rule as reflected were not always non-violence. We however need to appreciate the ideological principles and convictions of our freedom fighters had at their time and the specific situations the common people were placed. This volume reflects and accommodates both the views the authors have made in the articles.

writer of the editorial - Kalyan Das