END_OF_DOCUMENT_TOKEN_TO_BE_REPLACED

A Glimpse into The Karbi Way of Life

The short stay at Diphu, Karbi Anglong gave a whole new shape to the maiden purpose of collecting the reviewed papers presented in Karbi Seminar. It came to be such an inexplicable learning experience to be in the company of complete strangers who gave the feel of a lovely family in the few days of stay with them.

The Unsung Heroes | Quest | Episode - I 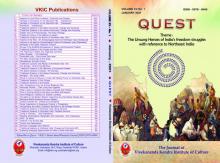 India, the largest democracy in the world had seen a very long history of freedom struggle before its independence from the British in 1947. Millions of natives who came out to fight the British rule gave their lives to break the shackles of oppression. The freedom of India is due to the sacrifice of thousands of freedom-fighters all over the country. Many people have played significant roles in raising the national movement. Freedom fighters like Rani Lakshmibai, Mangal Pandey, Bahadur Shah Zafar, Nana Sahib, Tantia Tope, Surendranath Banerjee, Subhash Chandra Bose, Bal Gangadhar Tilak, Dadabhai Naoroji, Chittaranjan Das and Jawaharlal Nehru etc., played a great role in getting independence for the country.

Srimanta Sankaradeva very well realized that the land where he was born is indeed a sacred place. In his monumental work ‘Bhakti Ratnakar’ as also in his ‘Srimad Bhagawat’ [10th skandha], he has devoted verses in praise of Bharata.

Wetlands of Assam - Past, Present & Future

As a part of Sanskriti Anveshak Lecture Series on land policy, Vivekananda Kendra Institute of Culture organizes a lecture on issues of wetlands on 9th October, 2010.  Presented by Prof. A.K. Bhagabati of department of Geography, Gauhati University, the title of the lecture is Wetlands of Assam: past, present and future.

A popular but unfounded belief has been spread that Hindus have thirty-three crore (33,00,00,000) gods. It is a misunderstanding of the Vedic concept of the State, and hence a misinterpretation of the word koti. Thirty-three divinities are mentioned in the Yajur-Veda, Atharva Veda, áatapatha-Brāhmana and in other Vedic and later texts. The number thirty-three occurs with reference to divinities in the Parsi scriptures of Avesta as well.

Marriage Rituals and Customs in the Jain Community

In Jaina tradition, as in all Indian communities, marriage is a community event as not only two individuals, but two families are united. Until, and sometimes after, marriage, children generally live with their parents, and it is the parents’ responsibility to introduce them [perhaps with the help of suitable intermediaries] to prospective marriage partners. It is quite misleading to refer to this as arranged marriage – in practice, the couple has every opportunity over a long period to get to know each other, and the decision to marry belongs to them alone.

Reflection of the Rāmāyana in the Marriage Songs of Assam, Bengal and Orissa

The epic tradition of India upholds an ideal tradition of Indian culture, assimilating the folk culture in it. India is a country of different communities, languages and cultural groups. Inspite of all the diversities it has a basic cultural unity. This unity is cemented firmly by the great epics like the Rāmāyana and the Mahābhārata. The Rāmāya¸a remains a perennial source of social functions on the cultural life of India.

On the Singpho Community

1. Initiation of the process through a societal and communal approval

2. In the Tai-Phake community, legal marriages are conducted socially and with the community’s approval. It is, in fact a social custom—an ancient tradition, that has been in continuance untouched over time.