Vivekananda Kendra - An Extraordinary Organisation with Ordinary Men came to existence. Mananeeya Eknathji Ranade, the Man behind the Memorial started Vivekananda Kendra a spiritually oriented service mission in 1972 as the living memorial to Swami Vivekananda comprising of a cadre of dedicated JEEVANVRATIS, Sevavratis, Vanprasthi and Thousands of Local Karyakarata as well as lakhs of patrons , well wishers and our publication subscribels. Vivekananda Kendra is centered around the noble thought service to man is worship of God - and is guided by the national ideals RENUNCIATION and SERVICE.

END_OF_DOCUMENT_TOKEN_TO_BE_REPLACED 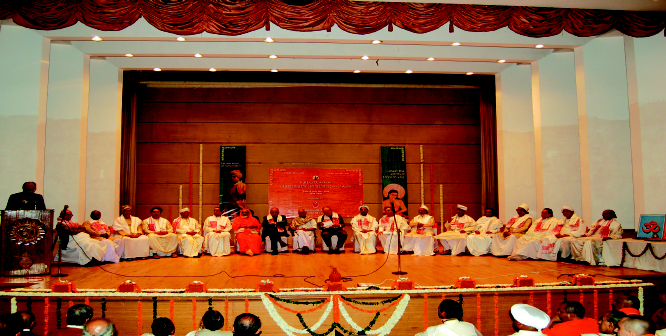 Srimanta Sankaradeva very well realized that the land where he was born is indeed a sacred place. In his monumental work ‘Bhakti Ratnakar’ as also in his ‘Srimad Bhagawat’ [10th skandha], he has devoted verses in praise of Bharata.

A few excerpts are taken from the chapter ‘Bharata Prasangsha’

The patriot monk Swami Vivekananda also singing paeans about the glory of Bharata in almost a similar tone, he said, “If there is any land on this earth that can claim to be the blessed punya-bhumi, to be the land to which souls on this earth must come to account for Karma, the land to which every soul that is wending its way Godward must come to attain its last home, the land where humanity has attained its highest towards gentleness, towards generosity, towards purity, towards calmness, above all, the land of introspection and spirituality, It is India”.
Srimanta Sankaradeva was a proponent of spiritualism. To be a true human being one must be imbibed with spiritualism. One has to be extremely aware of his stance in relation to divinity. In a couplet in his Bhagavata (10th skandha), he says,

You are there in the universe with
unfathomable existence.
The universe itself is but a part of your
supreme being.

You are there deep in our hearts but being
Not adequately devoted we miss you.

Swami Vivekananda echoed almost a similar thought when he said in a lecture delivered at Ramnad, he said: “Therefore, my friends, the way out is, that first and foremost we must keep a firm hold on spirituality – that inestimable gift handed down to us by our ancient forefathers”. He further said, “Each soul is potentially Divine”, apparently proposing that one has to search for the divinity within one’s own self with great devotion.

The great visionary Srimanta Sankaradeva (1449-1568 AD), a preacher, poet, composer, playwright, artist, philosopher and reformer, as the fountainhead of Sattra Institution brought the nectar of the Bhakti Movement that prevailed throughout the country from the fourteenth century onwards to Assam, the then Northeast India. The Sattra institution he envisioned and draws inspiration from the Bhagavata Purana. It combines the concept of a holy assembly for religious learning with spiritual norms and solidarity between the preceptor and the disciples. Thus, it inculcates the overall sense of working for the welfare of all as a collective consciousness for the collective good of entire humanity.

The Sattra institution became so pervasive in its influence on the religious, social, and cultural life of the people, that, the Sattra institution with the Namghar (also called Kirtanghar), the prayer hall as the center-stage and with the devotees and Sattradhikars (of both celibate and the household order) became the center-stage of all activities in the villages and also in the interior areas thus, disseminating the universal ideal of the Vaishnava movement in the prevailing society of the then Assam. They became the nerve center of wide-ranging activities such as – dance, music, bhangra (one-act plays), literature, painting, sculpture, mask-making, wood-carving, cane & bamboo works, weaving, agriculture, etc.

The Sattra and Namghar tradition illustrates an ideal Social Order, that of Integral Humanism. With its spiritual base, a Sattra is an organic whole, an ideal model of an extended family with the potential to realize the dream of Vasudhaiva Kutumbakam. Because of its inherent self-sufficient qualities, it can become a source of economic sustenance and illustrates the method of generating artha through dharma. After the mahaparayan (passing away) of Sankaradeva his principal disciples like Madhabdeb, Damodardev, Haridev, and later Guru-s like Gopal Atta, Aniruddha Dev, Mathura Das Burha Atta, Ai Padmapriya, Bodala Padma Atta, Narayan Das Thakur, et al institutionalized the Sattra structurally and functionally with its paraphernalia. The two centuries posterior to Sankaradeva saw a great proliferation of the Sattra institution of Assam with his disciples spreading to different parts of Assam and establishing various Sattras.

It was in the above background that VKIC had for the period from 2003 to 2008 taken up the Sattra Institutions as a subject for documentation and research work and later in 2006 Sanskriti Anveshak sessions on the Vision of Srimanta Sankaradeva and in 2019 on the Namghar.

In October 2003, an interactive program with  Pujya   Sattradhikar Prabhus and members from the Vivekananda   Kendra fraternity was held at the Yoga Hall of VKIC to start the   ‘Samparka Abhiyan’ of VKIC with the Sattra-s of Assam.   Executive Council (EC) Members of VKIC and Karyakartas of   Vivekananda Kendra went across the state from Tinsukia to   Dhubri visiting Sattras and meeting Sattradhikar Prabhus, of  which the Sattras in Majuli were of prime focus. (Ma. A Balakrishnan the then Vice President, Vivekananda Kendra Kanyakumari, Ma.S Gurumurthy, Noted Journalist & Member, Managing Committee, Vivekananda Kendra Kanyakumari were also present.

VKIC organized a 10-day workshop on Mask-making and Sacipat production on its premises in Uzanbazar from 27 May to 5 June with financial assistance from the Council for Advancement of Peoples Action and Rural Technology (CAPART).

Resource persons for this workshop were from Sri Sri Khatpar Sattra, Sivsagar, Sri Sri Samuguri Sattra, Majuli, the Kollong Kala Kendra, Puranigudam for mask-making and Sri Sri Aunati Sattra, Majuli  for Sachipat making. The participants were youths from Guwahati and some of whom were students from the Assam College of Arts and Crafts. The workshop was interspersed with several interactive sessions where the existing purpose and system of making the masks were discussed along with its advantages and disadvantages. Further, discussions were held as to how to strengthen the craft work and to look into the future possibilities of expanding the same.

Some 18 talks on various aspects of the Sattra tradition where scholars like Pujya     Sattradhikars and Sattriyas deliberated and interacted in the relevant topics for a collective      learning. These discussions led to the publication of the book, Glimpses of the Sattra           Institution of Assam.

A National Seminar with the above title and perspective: “National Union in India must be a gathering up of its scattered spiritual forces”, as said by Swami Vivekananda was organized in New Delhi.

The two-days programme in New Delhi in the presence of 15 Sattradhikar Prabhus (Spiritual Heads of Sattras) saw the participation of 12 Scholars and 24 performing artists from various parts of Assam. Besides the Sattras, representative from the Srimanta Sankardeva Sangha was also present.

The deliberations in this two-days program were on the following themes and topics.

(b) Socio-economic role of the Sattras

This two-days programme was largely attended by the local people from Delhi who for the first time became aware of such tradition of the country.

VKIC took up a survey of the Sattra institutions of Assam in 2007-08. Data was gathered from 450 Sattras of which a sample of 71 of them was collected by our field investigators who stayed in the respective Sattras for two to three days to collect the necessary information and record their observations. The information from the rest of the 379 Sattras were collected though a postal survey wherein Sattras sent their response to the questionnaires sent by the VKIC. This postal survey was followed up by phone calls and in many cases through the well wishers of Vivekananda Kendra in that vicinity.

The data and information collected through this survey was later published as a book.
Samskriti Anveshak Session on ‘Vision of Srimanta Sankaradeva’ in 2006 & Namghar in 2009
Interactive sessions on the above theme with participation drawn from the Sattra-s, the Assam Sattra Mahasabha, the Srimanta Sankaradeva Sangha, the Academic community and Practitioners saw very interesting discussions took place which has impacted the society later at the ground levels positively. Similarly, the Sanskriti Anveshak sessions on ‘Namghar’ in 2009 which later got published as a book too, reiterated the fact that the Gurujona-s vision of India becoming a Jagatguru can still be achieved through the Namghar, provided it followed the basic purpose for which such an institution came into existence.

These sessions reiterated that the practice of elevating oneself from gunas like tamas and rajas to imbibe sattva guna and even going beyond it to understand and experience concepts of ‘Niskam - Nirguna – Nirakar’ and to do ‘manab sewa’ by serving the ‘daridra Narayan’, the person (bhakat), the society (samaj), has always been the ethos of a Namghar.

All the above work of VKIC since 2003 till date concerning the Sattra & Namghar Institutions and the vision of Srimanta Sankaradeva is in essence to unearth the spirituality still present in the society and the individual to actually make India the Jagatguru as promoted by Srimanta Sankaradeva and which has been pursued in modern times by Swami Vivekananda or Sri Aurobindo.

In order to celebrate the completion of 25 years of VKIC, the Institute has planned yearlong activities of work with the Sattra-s & Namghar-s through workshops, symposiums, field visits, etc to prepare for a state level seminar on the ‘Vision of Srimanta Sankaradeva’, to be held towards the end of this year.

Thank You for Reading